History of the House of Loreto

The House of Loreto is dedicated to serve those men and women whom God has seen fit to bless with a longer life.  Mr. William Ignatius Zink, a dear friend of the late Bishop Walsh, Bishop of the Diocese of Youngstown, recognized the need for adequate care of our Senior Citizens.  Mr. Zink provided the means for the old Loretto Home for the Aged, which was located on Blake Avenue, and operations began in May 1954.

The House of Loreto on Harvard Avenue 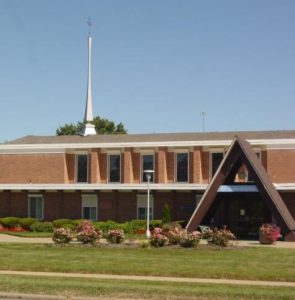 Actual construction began in June of 1962 on the “village-style” home situated on eight acres of land on Harvard Avenue and was completed in August 1963.  The House of Loreto was brought to fruition through the efforts of the Sisters under the capable guidance and leadership of the Community Superiors. The House of Loreto now holds a place of honor in the Canton community and environs.

Our commitment to meeting the spiritual, physical and emotional needs of our Residents, our ongoing commitment to meet the highest professional standards, and our belief in the dignity of the individual have distinguished us as an ideal caring facility in the service of our Older Americans.

About our Name: The Holy House of Loreto

Within a basilica in Loreto, Italy stands the small stone house in which, tradition tells us, the Holy Family lived while Jesus grew in “wisdom, age and grace before God and men” and in which St.Joseph breathed his last in the arms of Jesus and Mary. That Holy House once stood before the Grotto of the Annunciation.  It was venerated from apostolic times and housed a statue of the Blessed Mother and the Christ Child said to be carved by St. Luke.

On December 2, 1295, through the miraculous intervention of the angels, the little home of the Holy Family was transported to Loreto in Italy.  To the amazement of the local population, the Holy House was left, minus its foundation, in the middle of the road.  In 1296,in a vision the Blessed Mother identified the house as hers.

After years of skepticism and scientific research, it was declared in 1851 that the foundation remaining before the Grotto of the Annunciation in the Holy Land and the building stone in the Holy House matched.  The limestone was common to Nazareth and not of Italian origin.  Modern studies support this conclusion.

The first recorded pilgrimage to Loreto was held in 1315, and pilgrimages have continued to this day.  When air travel became commonplace, Pope Benedict XV proclaimed Our Lady of Loreto as the Patroness of Airmen. On April 11, 1985, Pope John Paul II made his own pilgrimage to the Holy House.

It is this House which gives the House of Loreto both its name and its spirit:  A family joined in love and caring in a home where Residents may live out their lives in a dignified and spiritually enriching atmosphere—the threshold of heaven.