Sailing on the Bay

Do you know the best kept secret in Erie?  Sailing on the Bay!  Grade 8 got to experience that in grand style aboard an 1812 war ship from the Battle of Lake Erie.  Thanks to the generosity of Country Fair and its customers and the Flagship Niagara League, the students spent an afternoon sailing on the Brig Niagara.  They had the honor of meeting the ship’s captain, Wes Heerssen at Dobbins Landing.  Here he gave a lesson on the War of 1812.  Then they boarded for a real sailing adventure.  Once aboard the students were divided into small groups to engage in work on the ship just as the sailors did of long ago.  Each group was given lessons in sailing from the crew members.  Students learned additional history about the Niagara and its role in the battle.  They also learned how to set sails, and how the wind works the sails.  They even got a turn steering the shop.  This experience will never be forgotten by these young sailors.

It was a perfect morning.  The temperature was just right and the sun was shining.  Grades 5 – 8 gathered in the back of the school to watch our 8th graders launch a solar air bag.  In this science experiment a 50 ft. long bag made out of a lightweight plastic material is launched into the air.  You begin by holding the bag open and running around to scoop up air.  Then the sun warms the air molecules in the bag and their movement begins to speed up.  The heated air inside the bag is less dense than the cooler air on the outside of the bag and so the solar bag will float.  And float it did–all over the field.  It went up and down like a kite in March winds.  The students took turns jumping up to touch the bag.  Running after it as it floated in the air was just as much fun.  What a way to learn a scientific principle!

Each day at St. James School begins with a salute to America. Promptly at 8:45 each morning representatives of the Safety Patrol, flanked by representatives from Grades K-8 form an honor guard outside the front 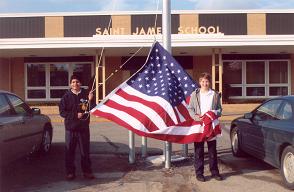 doors. Patrol Captains proudly carry Old Glory to the flagpole while all stand at attention. Students are then lead by 8th graders in saying the Pledge of Allegiance and singing “You’re a Grand Old Flag.” Students wait enthusiastically for their turn to attend the flag-raising ceremony, and passersby on Buffalo road have been seen to join in! 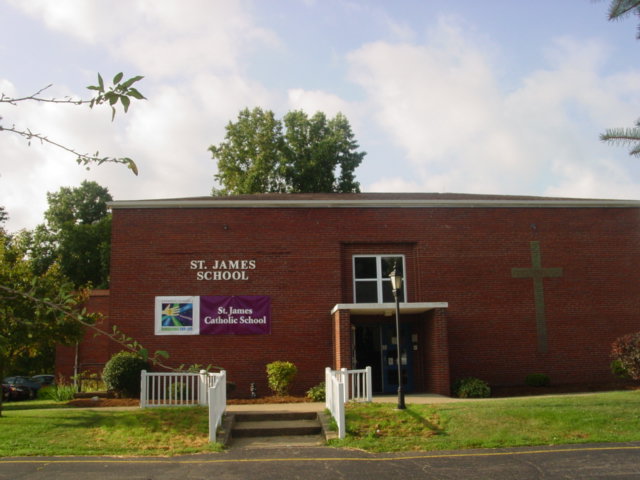 This year our Community has begun a new ministry at another St. James School  in Waynesburg,  Ohio.  Sister Clara, Sister Marianne and Sister Diane teach religion and Sister Judith who drives the Sisters tutors some of their students.  The second graders are being prepared for First Communion and have made their First Confession in a beautiful 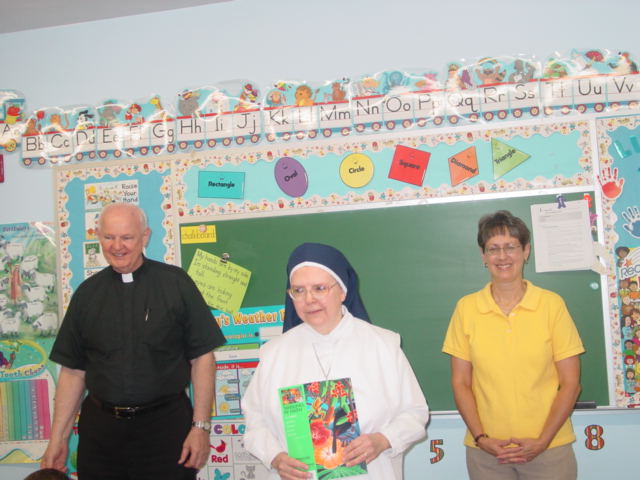 Liturgy.  The younger children can tell in their own style the stories of such Biblical Giants as Abraham and Moses.  Grade Three is concentrating on the Marks of the Church and the Fourth Grade  are studying the Ten Commandments and the Laws of the church.  The Fifth and Sixth Grades are learning about the Seven Sacraments this year.  They have become excellent Lectors at Mass.  One child said “The Church is awesome!” and another told one of the Sisters that “Religion is my favorite subject.”